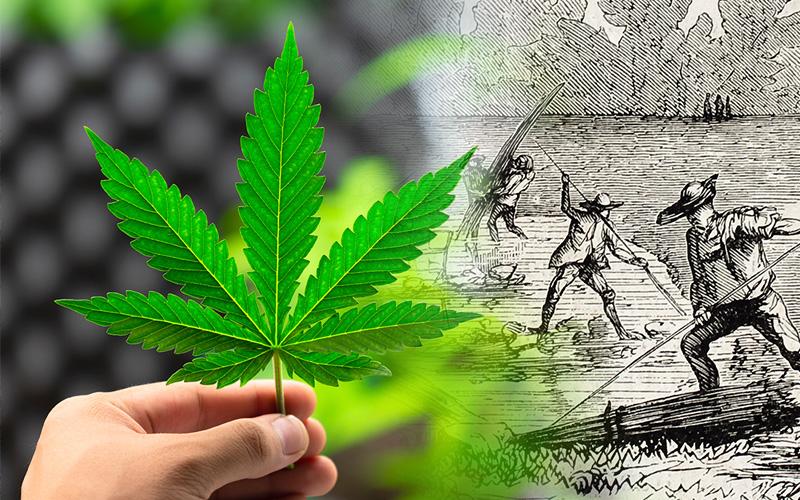 What is the History of CBD?

CBD, or cannabidiol, might feel like it’s a modern phenomenon, but it’s been around for far longer. As a naturally occurring substance it’s been a component part of a family of plants that have existed for tens of thousands of years, even if human society has been slow to understand its properties. With over 6 million people having used CBD in the UK in the past year, evidently that understanding is growing.

This period of explosive growth can actually be traced back through the millennia, with many records suggesting that hemp is one of the earliest plants cultivated by humanity. In many different cultures across the world there are clear details relating to the use of cannabis and hemp. Let’s piece together where this journey alongside CBD began.

How was hemp used historically?

The cannabis family as we know it today is broad and multifaceted, with hundreds of different strains and colours and smells and potencies, but that’s a product of human experimentation. The origins of human interaction with cannabis, and therefore CBD, has much simpler roots than that, if you’ll pardon the pun.

The cannabis plant is indigeneous to Central Asia, and particularly the Indian subcontinent, though its usage spreads much further. Archaeological records suggesting its cultivation dates back to the end of the first ice age with the birth of agriculture 10,000 to 12,000 years ago. As a strong, fibrous material, hemp was probably the earliest plant cultivated for textile fibre!

There’s obviously a difference between hemp plants and CBD usage however, but even CBD usage has been recorded several thousand years ago. It’s hard to pinpoint the first time cannabis would have been used for something other than textiles, but in 2737 BC there was the first documented use of cannabis-derived medicine by Chinese Emperor Sheng Nung. Rather than CBD oils, he drank cannabis-infused tea!

Moving to the more modern era, hemp was until very recently considered an essential crop. King Henry VIII actually fined farmers for not growing industrial hemp in 1533! Then, nearly a hundred years later in 1619, settlers in Virginia made it illegal not to grow hemp. Given the plant’s illegality now in some parts of the world, it’s hard to imagine how integral it was seen to everyday life. At Vitality CBD, we’re happy to be bringing it back to prominence.

How and when was CBD discovered?

Even if hemp has been cultivated and used in many different forms by humanity for a very, very long time, we didn’t truly understand it’s properties until the last 100 years or so. With the advancement of both biology and organic chemistry, we’re now in a much better position to break down the molecular make-up of the cannabis plant, including CBD.

CBD, an abbreviation of cannabidiol, was first discovered in 1940 by Roger Adams. He isolated both CBD and another cannabinoid called CBN (cannabinol) from the hemp plant, and hypothesised about the existence of the psychoactive chemical THC (tetrahydrocannabinol). It wasn’t until 1964 that THC was isolated by Raphael Mechoulam—one of the leading names in cannabis science!

It was through Mechoulam’s work that the stereochemistry (the 3-D molecular form) and properties of both CBD and THC were identified. What’s fascinating is that given how THC is often associated with the high you get from ingesting cannabis, CBD was identified beforehand! Clearly, CBD has always been a very important molecule.

What is the future of CBD?

Since CBD’s isolation in 1940, it hasn’t been used too prolifically until this side of the millennium. Currently, CBD in the UK is still being researched into, and due to this is classed as a food product by MHRA, which means no medical claims can be made around CBD.

However, there has still been a recent boom, and you can now find CBD oils, CBD balms, CBD e-liquids and CBD just-about-anything! So, what does that mean for the future of the CBD market?

At Vitality CBD we’ve been surveying our users on what they look for in CBD products, and the ways in which they most commonly use CBD, and the answers have been really intriguing. What we’re seeing more and more is users being proactive in using CBD for situations we hadn’t initially considered—that’s down to just how versatile CBD is.

This is why we’ve created two bold ranges that target the uses our audience were already taking CBD for: CBD for fitness and CBD cosmetics. Our prediction for the future? That you’re going to see more and more niche ranges taking advantage of cannabidiol as a lead ingredient. It really is the future.